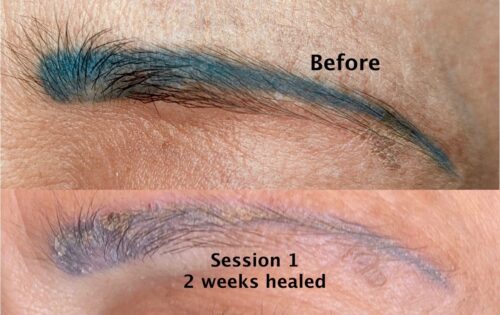 What is the best Tattoo Removal System for me?

There are many “removal” methods for permanent makeup or tattoo lightening. The term “lightening” is used because nothing is 100% guaranteed.

This method is the most commonly thought of when it comes to tattoo removal. It is not the most effective when it comes to removing tattoos. Besides being costly, painful, and potentially scarring, lasers often cannot remove some inks in tattoos.

How Does This Method Work?

Lasers work by “seeing” the pigment in the skin, and then “shattering” that pigment. Unfortunately, it will often push the pigment deeper when it shatters and relies on the body’s lymphatic system to “remove” the pigment fragments over time. The first criteria in the process is “seeing” the pigment. Lasers cannot see white, so the lighter the pigment is, the more difficult it is for the laser to remove it. That is one reason why tattoos often cannot be “completely” removed by laser. Laser removal usually takes several sessions. With each session, the tattoo lightens until it is too light for the laser to “see” it. Once that happens, the remaining pigment is what you are left with.

Lasers work pretty well at lightening carbon black inks, but usually not completely. Lasers are also not compatible with some ink types. Often times lasers will “change” the color of the original pigment leaving an unsuspecting patient with unsightly neon green or pumpkin orange eyebrows instead.

What Can You Do?

Many patients wonder what their options are if old permanent makeup has color shifted, if they received unexpected results with new brows, or they just want to get rid of an old tattoo. There are a few options, depending on the situation and desired result.

For old, carbon black that has faded to grey or blue, we would still recommend the patient to have laser removal done first. But for almost all permanent makeup on the face, it is better to have manual removal.

Timeless Allure offers tattoo removal with less potential for scarring. It is not simply a “Saline” removal system. We use a 3-step process that allows for a more effective, yet safe method of lifting pigment. Additionally, it has the potential to lighten even past what a laser is capable of.

We also offer emergency tattoo removal. The sooner ink is removed (less than 48 hours is best), the easier it is to remove, and the possibility for a more complete result.

This method is still often a multi-step process requiring several sessions if the pigment is dark and/or old. Deciding on removal is a commitment no matter what method you choose, whether that be a laser or manual method.

Oftentimes, the old pigment does not need to be completely removed in order to color correct over the pigment. Think of the pigment in your skin as liquid color in a bucket rather than dried color on a page. Color on a page can be “covered” by another color. Color in a bucket will mix with new color added. This is why removal of old pigment is often necessary before new pigment can be applied to the skin for optimum results. Mixing colors in the skin may not result in even color throughout. 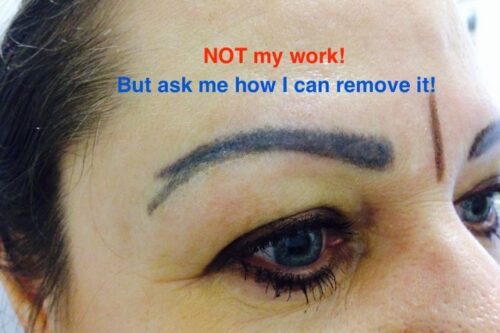 What Can I Expect During The Procedure?

During the removal process, you will be numbed. The process will feel very similar to when the pigment was initially applied. A beneficial acid mixture of lactic acid and glycolic acid are applied into the skin at the level the pigment resides. We use the term “beneficial” because the word “acid” can sound scary. These two acids are widely used in the cosmetic industry to aid in the health of the skin and are “beneficial” components of skincare products. Their effects on the skin are healthy and productive in the concentrations we use. In tattoo removal, these acids break up the cells (macrophages) holding the pigment molecules in the skin.

After that, the acids are then neutralized so their work in the skin is halted.

The third step is to “pull” the pigment molecules out of the skin. A salt solution is used to “pull” the pigment up and to the surface of the skin with a process called Osmosis. With the pigment molecules now free and unencumbered, much of the pigment will rise and sluff off during the healing process. Some of the deeper pigment that is liberated will filter out through the lymphatic system. Here it is important to understand that because we are liberating often deeply placed pigment that then rises closer to the surface of the skin, your tattoo may appear even “darker” at first. As the healing process continues and pigment molecules are sluffed off or carried away by the lymphatic system, the tattoo begins to lighten. With each subsequent session, the pigment is further broken up and lifted out.

How is Our Process Different?

Many tattoo removal systems rely on only saline to attempt to lift the pigment out of the skin. However, without the initial acid step to break up the macrophages trapping the pigment molecules, there can only be limited success in most cases.

Each removal session will take 1-2 hours.

What Can I Expect After A Procedure Session?

As mentioned above, your tattoo may appear even “darker” at first. As the healing process progresses, your tattoo should lighten more with each session. Some people only need 2-3 sessions to lighten enough to then successfully cover with new pigment. Others will need additional sessions. Each case is different and depends on a variety of factors such as the desired end result, depth and darkness of initial pigment, the color of initial pigment with relation to the desired end result, general skin and body health, nutrition, medications, sun exposure, and more.

If you wish to see if tattoo lightening is for you, schedule a free consultation to go over your options.